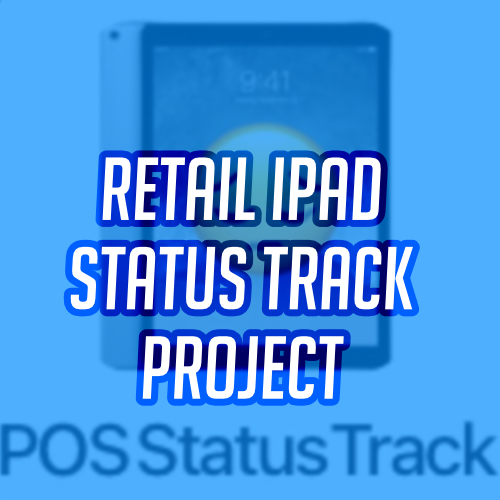 In early June 2022, all of the Retail iPads started experiencing intermittent disconnections from the employee Wi-Fi which sometimes happened in the MIDDLE of transactions, causing collateral problems.

In an effort to track down exactly what is happening, I suggested we keep a written list of disconnects and intermittent issues. With this information, so we can check the network logs and related data to determine if it is an hardware problem and/or a network problem.

I decided to streamline the written process since the POS iPads are used by multiple staff members during peak weekend times (when IT is not onsite) and any resolution would require the combined efforts of the Retail and the IT department. The design cues for this project is an easy to use and centrally managed reporting system.

This form DOES NOT replace entering a normal help desk ticket, it is an additional component which can be helpful in the future for diagnostics where manual logs and/or a record of the issue makes resolutions quick and easier for all parties involved.

In the first step of this project, I created the Retail Operations iPad Status Tracker form using Microsoft Forms to allow any staff member to report the timely status of an iPad from ANY other Retail iPad. As a note, the form link can be accessed from any internet connected device by PMA staff for reporting.

The form provides a list of Retail iPads, asks for the date, the rough time and a summary of the issue which goes into a spreadsheet which the IT department can read and review as these issues crop up. To assist with troubleshooting,

Question 1: Please select the affected iPad(s) from the list below.

I included all of the information for each iPad for the IT department to check the relevant systems for details without burdening the Retail staff.

Question 2: What date did the issue occur?

A date picker will appear on the screen where a user can select the appropriate date.

Question 3: Please enter the time that your issue occurred (in 15-minute increments)

This makes it easier to check network logs and the like if there is a specific time frame to focus on. In addition, I can assume that a user may be off 10-15 minutes in either direction depending on how busy they are.

Question 4: Please record your issue below and any additional notes.

This an open text form where a user can type in any relevant information to the Retail iPad POS so the IT department can have an idea of what to look for.

Using our MDM system JAMF, I automatically pushed out the POS Status Track to all of the Retail iPads home screen. I used a sad emoji and the iPad as the icon because it will be easy to recognize and understand for the changing Retail staff. Additionally, any new iPad added to the Retail group in JAMF will automatically get this form link automatically installed.

This system is still being used to report the status of the Retail POS iPads in the Philadelphia Museum of Art and allows data to be easily captured for effective trend analysis. After a month of reporting so far, there seems to be something specifically wrong with the iPads in the American Store and/or the wireless network in that that area, which gives us a concrete angle.

Currently, the American Store was on a different network and now I am testing to see if the reported issues fall in line with the other iPads in the different stores (i.e. sub-10 reported issues over a month).

Further testing and troubleshooting will be required to narrow down the specific issue since all of the Retail iPads are the same model and on the same version of iPadOS.

As for the Status Tracker, it will be rolled out to other large deployments of iPad through JAMF so other departments can have a quick way to report sporadic and hard to document issues.

Future versions of this tracker could include a file/photo uploader in case screenshots/video footage is needed (i.e. a glitchy screen that only happens at a certain time, etc) which pairs well with the built in screen recording and screenshot software of the iPads. 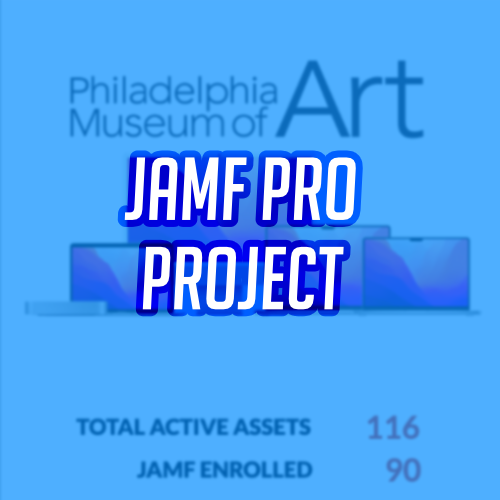 As the subject matter expert on JAMF, I was tasked with figuring out how the system worked, what Apple hardware the Museum had, and how to best document that knowledge for future reference.

I started this complex project with a simple concept: “How does this software work in perspective as a new user?”

I automated the setup of iPads, tracked down and remove old devices, and created an easy to maintain Asset Management system while documenting everything to make it easier to teach to someone else.

This multi-faceted process covered 3 aspects (Assessment, Deploy & Document, and Tracking & Management) of the SaaS Jamf as a Mobile Device Management (MDM) of Apple hardware in the Museum.

Jamf is a massively integrated MDM for Apple hardware and software in an enterprise environment. As of January 2021, Jamf is managing 20 million Apple devices around the world (source).

Needless to say, it is a big challenge to prepare for the rollout of this software in our own environment. I was tasked with the rollout of JAMF in our environment. To get started, I viewed this project as 3 separate parts (Assessment, Deploy & Document, and Tracking & Management) with the major focus point being well documented and streamlined processes.

The first step of the process was to determine the exact state of relevant Apple hardware that was accessible at the Philadelphia Museum of the Art. In the flowchart below, I laid out my thought process for determining what hardware we have and the following steps.

Determining which products were worth keeping and which devices would be e-wasted took a considerable amount of time. Prior to my involvement, no one every took an inventory of all the iPads, iPhones, iMacs, MacBooks and other devices on site at the Museum.

According to my records, we had more than 250+ Apple devices floating around in various stages of usability in addition to the fact that the exact location of most of these devices were unknown.

The second step of the process was to make sure Jamf worked for our needs and document the process for future reference.

In the images below, there are 2 iPad home screens, one setup normally and one setup through Jamf:

In addition to the time savings for each iPad and the associated setup, iPads can be easily repurposed for different departments or needs since Jamf handles the rollout of applications as well.

Using the Microsoft Power Apps platform, I used Canvas apps to create an asset management system for Active Assets and e-waste Assets with data being supplied from a Microsoft Excel spreadsheet that I painstakingly assembled.

The Excel spreadsheets (and by extension, the canvas apps) track a few important details of each hardware record.

Also the counts on the home screens for both apps update in real-time either from records added in the applications OR manually added to the underlying Excel spreadsheet.

This solution allows for easy management in the future (since a variety of devices can access the Asset apps) and easy to manage since Excel is easily understood at a base level for most users. The app allows the data in the Excel spreadsheet to be searchable even using partial matches. Also, this information allows management to make an easy decision as to what hardware should be updated.

Assessment of Inventory and Hardware

Our records originally reported 250+ Apple devices when I started this project. After the project, I was able to reduce the active devices down to 116, with JAMF licensing costs required for only 90 of those devices.

Regarding the JAMF licensing costs, I have saved at least $2600 per year in additional licenses costs that were no longer needed regarding active devices.

In addition, I was able to ewaste 103 devices that were no longer being used at the Museum, saving on potential license costs, employee time and mangement of the outdated hardware.

In addition to all of the above, almost every Apple device in the Museum is now accounted for and easily tracked to a user and/or department making hardware management easier in the Windows dominated environment.

I created a 55+ page technical guide with images written in Markdown showing exactly how to use Jamf in the scope of the Philadelphia Museum of Art. I went through extensive detail showing the exact settings and common solutions to Jamf issues (such as updating annual certificates to keep the system working).

The main focus of the App method was to get ahead of the digital clutter where critical data lives in a bunch of files spread across various locations in multiple stages of completion (i.e. Apple_Assets_2021_2022_v3_Work_In_Progress.xls). I am sure we all had to deal with some level of this in our life and careers.

The added purpose of creating the apps were to have a central place to manage and update information regarding Apple hardware at the Museum. As it currently stands, the apps are easily accessible through Microsoft Teams through any device (mobile or otherwise) as long as the user has proper credentials.

Another benefit of the apps (as a whole) is to provide future technicians an easy way of recording and updating devices on the go using in-house resources (i.e. an old iMac was tossed due to a cracked screen or Paris gets a new 14″ MacBook Pro which should be reflected in the Active Asset records).

I have laid the foundation for work that can easily be expanded for the future of the Philadelphia Museum of Art.